Our campaign: for sound transport decisions

Advocacy for public transport – and for rail in particular – is not a hobby or supplemental public relations exercise ... It's a struggle. Popular support for public transport, and for progressive, sound planning decisions, rarely, if at all, just happen by chance. They must be gained by a consistent, competent campaign to present the facts and logical arguments to persuade planning professionals, agency personnel, decisionmakers ... and voters.

For the Light Rail Now Project, what this translates into is an ongoing, day-to-day blizzard of activity: responding to inquiries, interacting with transport industry professionals and colleagues around the world, number-crunching, data analysis, report and article preparation ... then fine-tuning, polishing, and uploading the finished results to the website – all of this designed to provide ammunition for rail transit planners and advocates and to enable them to make positive decisions, including responding to the claims and misrepresentations of critics. In addition, the LRN Project pursues outreach and direct contact with local advocates to assist in their efforts – via telecommunications as well as personal travel and on-site interaction.

As we note in our About Us section,

The Light Rail Now Project believes that presenting facts, reliable information, and well-supported arguments is the way to counteract the avalanche of misinformation and misconception about mass transit, rail transit in general, and LRT, and particularly to enable planners, decisionmakers, and the public to make truly informed decisions in regard to LRT as an amazingly versatile, attractive, and cost-effective mode of transportation technology.

We also believe that the spectacular growth in interest and activity on our website represents one indication that we are gradually succeeding in our mission. As the graph below demonstrates, the Light Rail Now website has seen a steadily rising growth of activity. Over the course of 2005, the number of unique individual website visitors has grown from less than 17,000 in January to a peak of more than 22,000 toward the end of the year. (Last month – this past January, 2006 – the number exceeded 23,000.)

We need your underwriting support

Achieving and maintaining this level of success takes a huge – and extremely labor-intensive – amount of effort. Those efforts in return require resources – and that's where financial underwriting from those who support our activities plays a pivotal role.

The Light Rail Now Project – including the Light Rail Now website – depends on underwriting to sustain these crucial activities ... underwriting from people like you who benefit from the information on our website, and believe in our educational efforts. Your underwriting contribution is critical, both to helping maintain the website and to supporting important adjunct outreach activities to bolster rail projects and other major transit initiatives nationally and internationally. (For more details on our underwriting program click here.)

Over the past several years, the Light Rail Now Project and this website have continued to have an impact on transportation thinking and decisionmaking, well out of proportion to our relatively small size and funding level. Here are some examples.

· Light Rail Now's efforts have helped persuade some important decisions in favor of rail transit solutions. For example, LRN served as an informational resource which helped persuade the Los Angeles Times to support LRT (over a "Bus Rapid Transit" alternative) for LA's Westside Exposition corridor, and which in turn helped influence the transit agency's ultimate decision to implement LRT in this corridor (see Los Angeles: LRT Selected Over "BRT" for Exposition Corridor). Today, the Exposition LRT project is now well under way. that it is clear from feedback and inquiries that many planners in other agencies are relying heavily on LRN articles to make sound choices on LRT development, especially in comparison with "BRT" and other mode alternatives, in corridors targeted for higher-quality transit service. 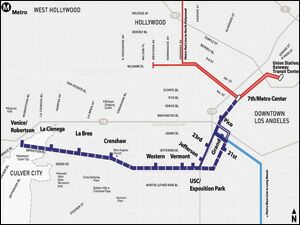 
· The Light Rail Now Project has served as an important informational resource for transit agency professionals, campaign consultants, and community leaders and activists in several major US transit initiative campaigns. These include several in which key victories have been achieved – Houston (Nov. 2003), Denver (Nov. 2004), Austin (Nov. 2004).

· Light Rail Now's February 2004 article A Bus by Any Other Name is Still ... a Train? apparently has been successfully used in Atlanta by supporters of wider public transport choices to challenge the portrayal of supposedly "trainlike buses" in an HOV lane plan favored by suburban highway-oriented interests and counterposed to rail alternatives. Georgia's governor subsequently signed a transportation funding bill which includes funding for an Atlanta-Macon regional ("commuter") rail line. This and other articles challenging claims and myths about "Bus Rapid Transit" also appear to be having an impact abroad – including in the United Kingdom, apparently, as well as New Zealand.

Just as Minneapolis's new Hiawatha light rail project was receiving its finishing touches, a fanciful PRT scheme, promoted by a private business consortium, was backed by politicians focused on highway transportation (in an effort to forestall further rail transit development). Local rail transit advocates cited and disseminated our Cyberspace Dream article to Twin Cities political leaders and other key community transit activists, successfully thwarting the attempt to promote and invest public dollars in this proprietary and technologically dubious PRT scheme as a substitute for well-proven and workable transit proposals (such as a streetcar proposal for the Midtown Greenway in Minneapolis).

Thus, the Light Rail Now Project helped change the course of transportation history in the region. This victory for rail transit in the Twin Cities has enabled local proponents of transit expansion to move forward with truly viable, real-world transit solutions – including plans for the expansion of LRT as well as regional passenger ("commuter") rail.

· Light Rail Now's articles on Houston have generated widespread interest. In the autumn of 2003, our article As Houston's Light Rail Project Nears Finish, Major Vote Looms Nov. 4th was favorably referenced by the US Department of Energy, which recommended our description of Houston's rail plan as particularly "accessible" to readers attempting to understand the project

· informational Light Rail Now Project reports like our article Why St. Louis's MetroLink Light Railway is a Mobility Bargain – referenced and linked by several major sites – continue to play a major role in transportation industry thinking and analysis with respect to evaluating the role of major public transport projects.

· Light Rail Now also has served as a valuable research source cited in important pro-rail study reports by a number of major studies, such as the report "Rail Transit Works: Light Rail Success Stories from Across the Country" conducted by the MaryPIRG Foundation (the research and policy arm of the Maryland Public interest Research Group), which cited data from several LRN articles 12 times out of 141 total references. LRN articles have been the source of major data references in several studies by Paul Weyrich and Bill Lind for the American Public Transportation Association. Jane's Public Transport Systems has also requested permission to reference material from LRN.

· in 2003, the Light Rail Now website received the Austin Chronicle's "Best of Austin 2003" award, as a majority of readers named LRN as their choice for "Best Effort to improve Austin".

· Light Rail Now continues to serve as a valuable national and international resource for transportation planners, decisionmakers, public officials and legislators, community leaders, and media representatives in providing information and data relevant to key issues in public transportation, rail transit in general, and light rail transit. The LRN website has demonstrated an important role in providing information about LRT's unique public benefits to key decisionmakers, rail campaign activists, planning professionals, media representatives, and others. As judged by feedback and various inquiries for information from transit and other public agency personnel, transit officials, key decisionmakers, political officials, community leaders, transit initiative campaign activists, project planners, engineers, and other professionals throughout North America and across the globe, LRN serves as a major reference for planners, citizen advocates, board members, and other transit supporters to press the case for LRT far and wide. Besides North America, contacts have come from the UK, France, Norway, New Zealand, Australia, Taiwan, China, israel, iran, india, Bolivia, and various other countries.

How you can help

The Light Rail Now Project and the Light Rail Now website are sponsored by Texas Association for Public Transportation (TAPT), a Texas non-profit corporation certified in 1973 by the US internal Revenue Service as a non-profit charitable educational organization under Section 501(c)(3) of the internal Revenue Code. Today TAPT is a member of the National Alliance of Public Transportation Advocates (NAPTA).

TAPT's influence on public transport project spans several decades, and precedes the launch of the Light Rail Now Project in 2000. Information disseminated by TAPT in the 1970s contributed to the development of the Dallas Area Rapid Transit system and the choice of LRT technology for the Dallas metro area; it also influenced major improvements to Amtrak intercity rail passenger service in Texas. In the mid-1980s, TAPT was also a seminal source of information and philosophical vision behind the creation of Capital Metropolitan Transportation Authority – the major public transit agency for the Austin, Texas region. Research and informational activities sponsored by TAPT have also contributed to enriching the understanding of various public transport issues and concepts within the industry and transport planning profession as a whole.

It's important to keep in mind that underwriting for the Light Rail Now Project supports both the Light Rail Now website and ancillary resources, including outreach activities aimed at assisting leaders and activists in communities planning or involved with LRT to bolster public transport, and in particular, to help support LRT and other rail transit projects and campaigns, nationally and internationally. This resource will grow in importance as increasing numbers of cities mount initiatives for various types of rail transit. Judging from the recent trend, more and more rail initiatives can be expected to be on state and local ballots across the USA in coming years.

If you believe in what we do, and want to materially assist our efforts – now's an opportunity to pitch in. Underwriting is affordable and easy. (For more information on underwriting, click here.) Here are several ways to contact us about underwriting: