The Hiawatha Line has 27 Bombardier articulated cars, currently deployed as 12 two-car trains on about a 7.5-minute headway in the peak and 8 two-car trains 10 minutes apart in the midday. The major stations, such as the one in tunnel at the main Lindbergh Terminal of the airport, can accommodate longer trains. Work recently began to lengthen the platforms at ten shorter neighborhood stations, currently in progress at several locations:

When the job is completed in 2010, rush hour service will be operated with three-car trains, presumably on a headway of 11 minutes or so given the limited size of the car fleet.

Incidentally, a free-fare zone on the light rail is the link between the two airport terminals (Lindbergh and Humphrey). Service on this segment of the Hiawatha LRT is also provided 24 hours a day. In addition, a "tram" (automated indoor "horizontal elevator" – i.e., peoplemover) provides a link between the Lindbergh concourses and the Lindbergh light rail station. Anyone changing to or from Southwest or international flights gets two tastes of rail (or at least "guided") transportation en route!

A new light rail station will be built at American Boulevard in Bloomington, a short distance north of Bloomington Central. Thus far, construction here has occurred only to close auto lanes to make space where the tracks run in a narrow median. The station was always planned, and even appeared on a map painted on the ceiling(!) of car 101, but was omitted when the line opened.
[Map: Metro Transit]

In large part because of the success of the Hiawatha LRT, momentum has grown for a second LRT line, the Central Corridor line, reprising the streetcars' "Interurban" line between the downtowns of Minneapolis and of St. Paul via University Avenue. To look over the territory I sampled Route 16, a major bus line using articulated buses every 10 minutes throughout the day and aided by a Route 50 express in the rush hours and busy times at the University of Minnesota. The buses clearly were having difficulty handling the crowds with long dwell times at boarding stops, late and bunched operation, and several cases where passengers intending to alight missed their stops.

Light rail to St. Paul will share downtown Minneapolis with the Hiawatha Line to south of Downtown East/Metrodome station, then diverge easterly and cross the Mississippi River on the existing Washington Avenue bridge, using two lanes of the lower (vehicle) deck. During design for the light rail, the engineers found support problems with the pedestrian deck, which as a result was closed in part.

At about 29th Avenue the line will enter University Avenue, a busy wide street with parking lane and two wide traffic lanes in each direction, plus left turn bays and sidewalks. Beyond the state capitol, the route will turn southerly in Cedar Street to 5th Street. Light rail cars can't turn on a dime the way streetcars did, but an alignment was developed to cut through a block occupied by a vacant bank building and emerge at Minnesota Street, then run easterly along 4th Street to the historic Union Depot. Although no major construction has begun, it is hoped to begin service in 2014.

I think that the corridor is very promising for light rail. It includes two downtowns, a vibrant commercial community around the university on the east bank of the river, the university buildings and stadiums themselves, a stretch of new residential (condominium?) development partly occupied and partly in progress, and then a few miles of residential and commercial territory that clearly has seen better economic times but is generating lots of transit usage.

At Dale Street the line will directly serve the Rondo community outreach library housed in an impressive 1920s-era store/apartment building. The strip's transit potential is clearly shown by the heavy usage of the present buses, one of only three 24-hour transit bus lines in the Twin Cities (the other two are north of downtown Minneapolis). Much of the way in St. Paul, the LRT stations will be a mile apart, so some local bus service will continue to be be provided.

The Hiawatha Line, reaching prestigious territory including the airport, office parks in Bloomington, and the huge Mall of America, provided over 10 million rides during 2008. I'd guess that the Central Corridor will do even better. The two cities clearly are not "identical twins" but even the runt of the litter has over 250,000 population, the state capitol, and is named after a saint whose cathedral has a more impressive dome than that of the capitol. Minneapolis enjoys a more parklike setting but has only one "dome", the home of the Twins (the team, not the cities). 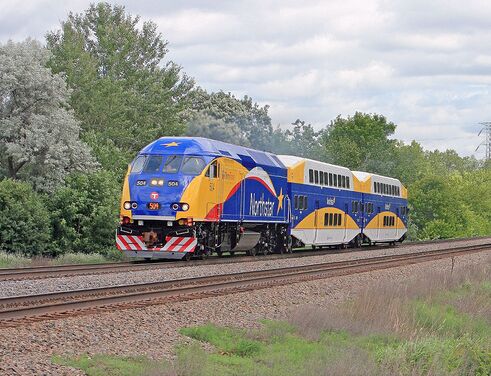 But before the additional light rail corridor, perhaps later this year (2009), regional passenger rail ("commuter rail") comes to the area. The Minneapolis station will be a lower level of the multimodal station on the light rail lines, where a broad island platform and new shelters are already in place between two BNSF Railway tracks. Five suburban stations will be spaced along 40 miles or so of line to upriver Big Lake, Minnesota. Initial service in the traditional rush hours is planned with several trainsets, one of which will provide reverse-peak service before making a second trip in the direction of predominant commuting. "It isn't light rail" but it will be another variation of mass transit in a region that was 100% bus for decades.
[Northstar map: Northstar Project]

More on Rail Transit in Minneapolis