This continues our photo-report examining Los Angeles's new "Orange Line" busway, widely regarded as perhaps the premier recent example of state-of-the-art "Bus Rapid Transit" ("BRT") – and the wide range of claims that this type of bus deployment is "rapid transit on rubber tires" and "just like rail transit, but cheaper". In this section, we turn to operational issues.

The system operates almost entirely on an exclusive alignment, using a former Southern Pacific and Pacific Electric Railway right-of-way. Average end-to-end schedule speed is about 20 mph. However, buses must currently slow to about 10 mph to safely pass through several dozen level crossings. 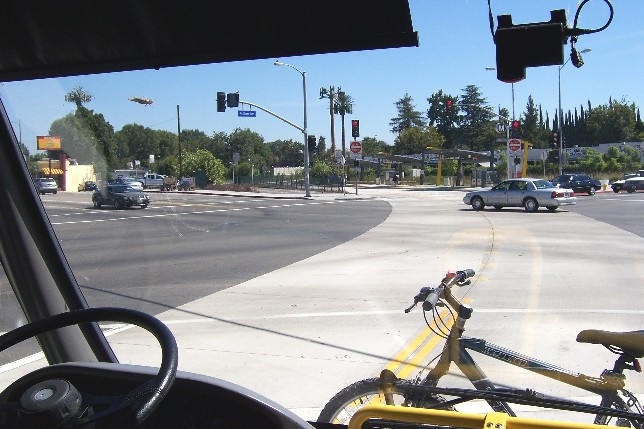 There are a number of quite dangerous level crossings, and this one at Burbank Blvd. and Fulton Ave. is one of the worst, because the busway (ex-railway) alignment departs crosses both streets at a diagonal. Unlike with LRT, there are no crossing gates. (NOTE: Earlier versions of this caption erroneously identified this intersection as Chandler Blvd. The busway/former railway alignment meets Chandler further south of this point and follows it eastward.)
[Photo: L. Henry] 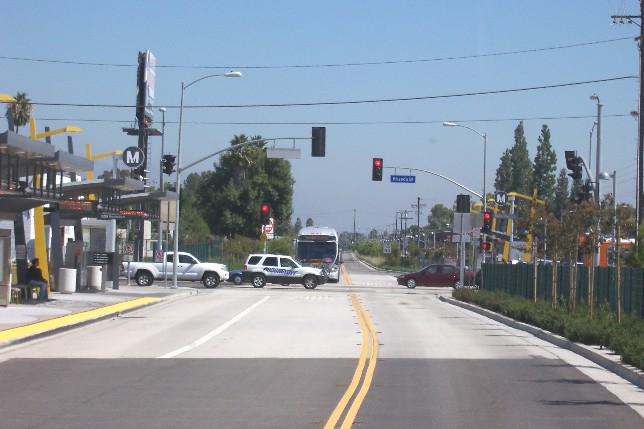 The Reseda Blvd. intersection also illustrates the level crossing problem. After a spate of accidents, buses now slow down to about 10 mph to cross through all level crossings and intersections.
[Photo: L. Henry] 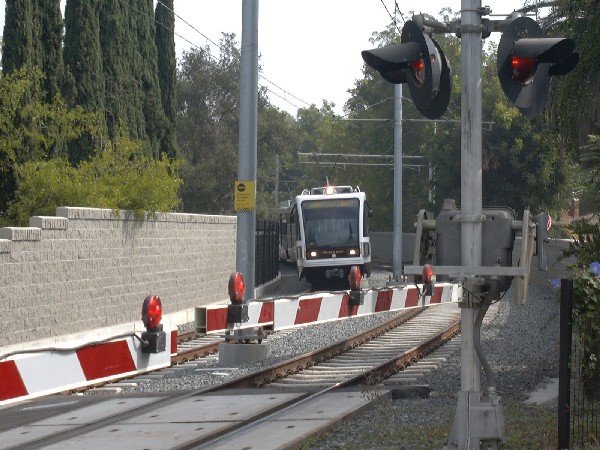 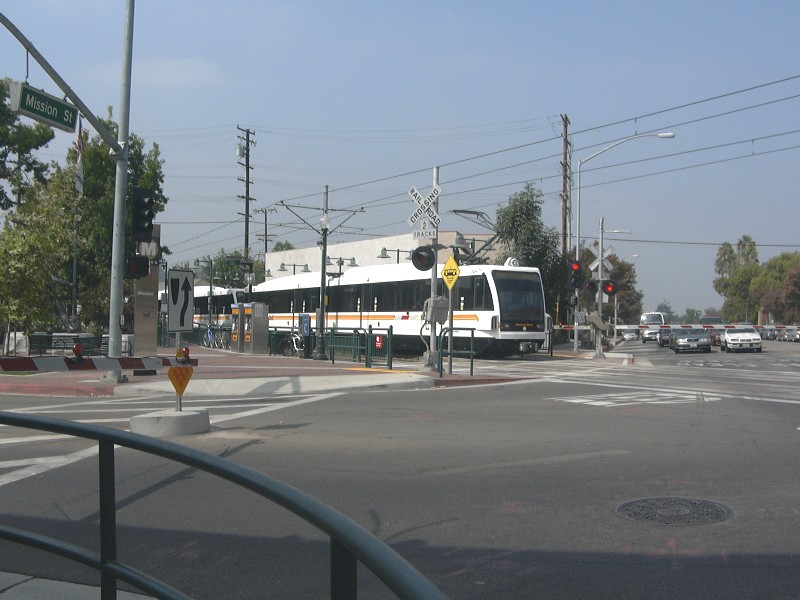 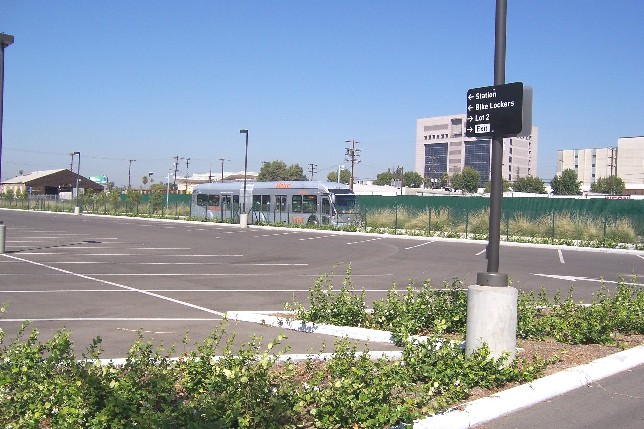 "BRT" promoters have been claiming that the "Orange Line" is attracting significant ridership from automobiles. But several major park & ride lots on the "Orange Line" – like this one at the Van Nuys station – are currently nearly totally empty throughout the day. If the busway is attracting travellers out of their cars, it is not evident from P&R usage.
[Photo: L. Henry] 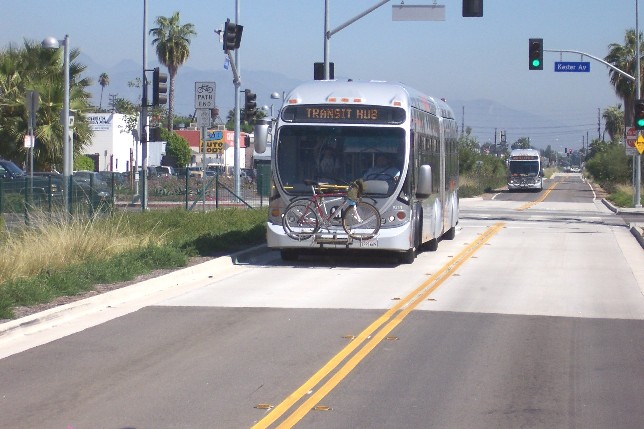 Bus bunching – the tendency of short-headway bus operations to cause buses to depart from scheduled operation and bunch together into "platoons" – seems to be a consistent problem with all high-frequency, high-volume "BRT" operations, and the "Orange Line" is no exception. In this photo, a de facto "platoon" of 2 buses is seen running westbound at Kester Ave. The net result of bus bunching is to render longer headways for passengers than is assumed in planning models (thus foiling ridership modelling assumptions) and in schedules (thus confusing and stressing passengers).
[Photo: L. Henry] 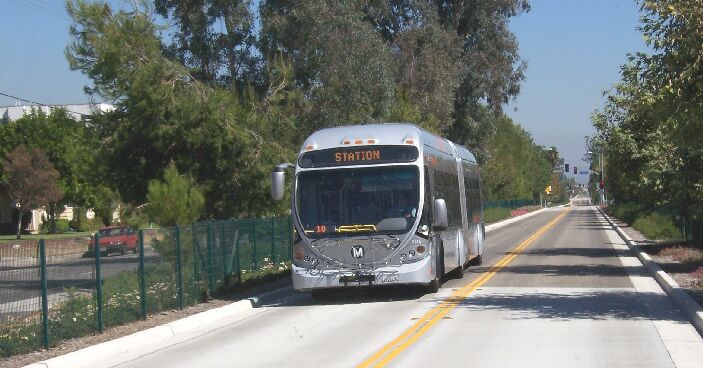 The problem of an excessively narrow running way (due to lack of shoulders and median buffer) has already been mentioned, but it's noted here as an operational issue. This causes bus drivers to slow down and hug the outside edge of their lanes. In this case, the westbound bus (approaching ours) is almost scraping the curb.
[Photo: L. Henry] 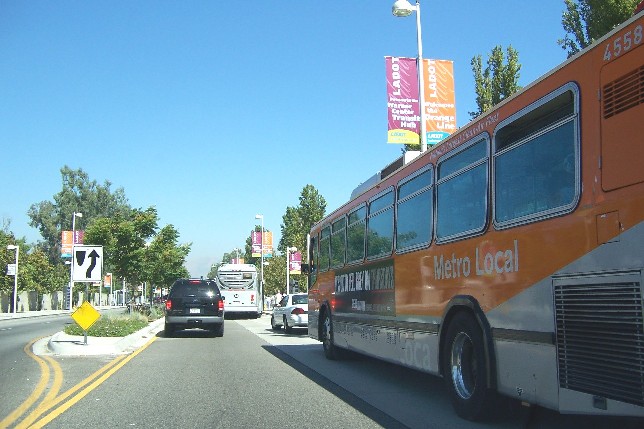 As previously noted, at the western end of the line, buses operate in mixed traffic to loop around and serve the Warner Center station. Traffic conflicts and modest congestion were evident.
[Photo: L. Henry] 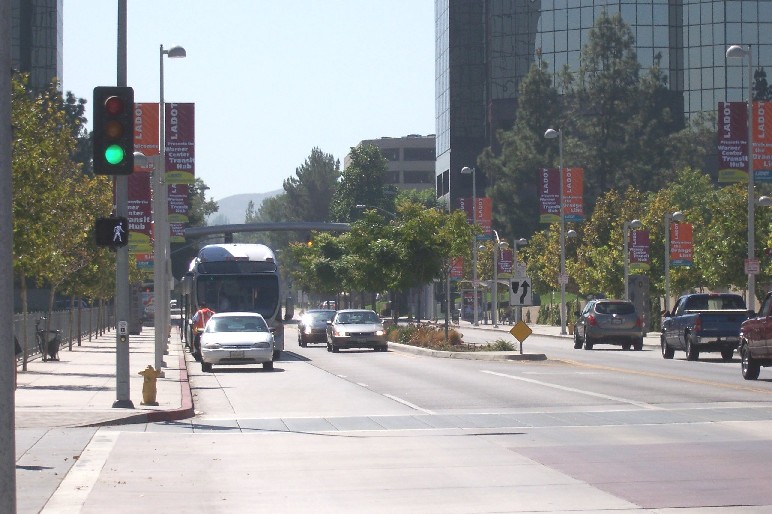 In some cases, buses are impeded by other motor vehicle traffic. Here, what seems to be a supervisor's car is blocking the buses' lane; buses had some trouble pulling out because of traffic in the other (inside) lane. Fortunately, this was the midday, off-peak period, so traffic was relatively light.
[Photo: L. Henry]